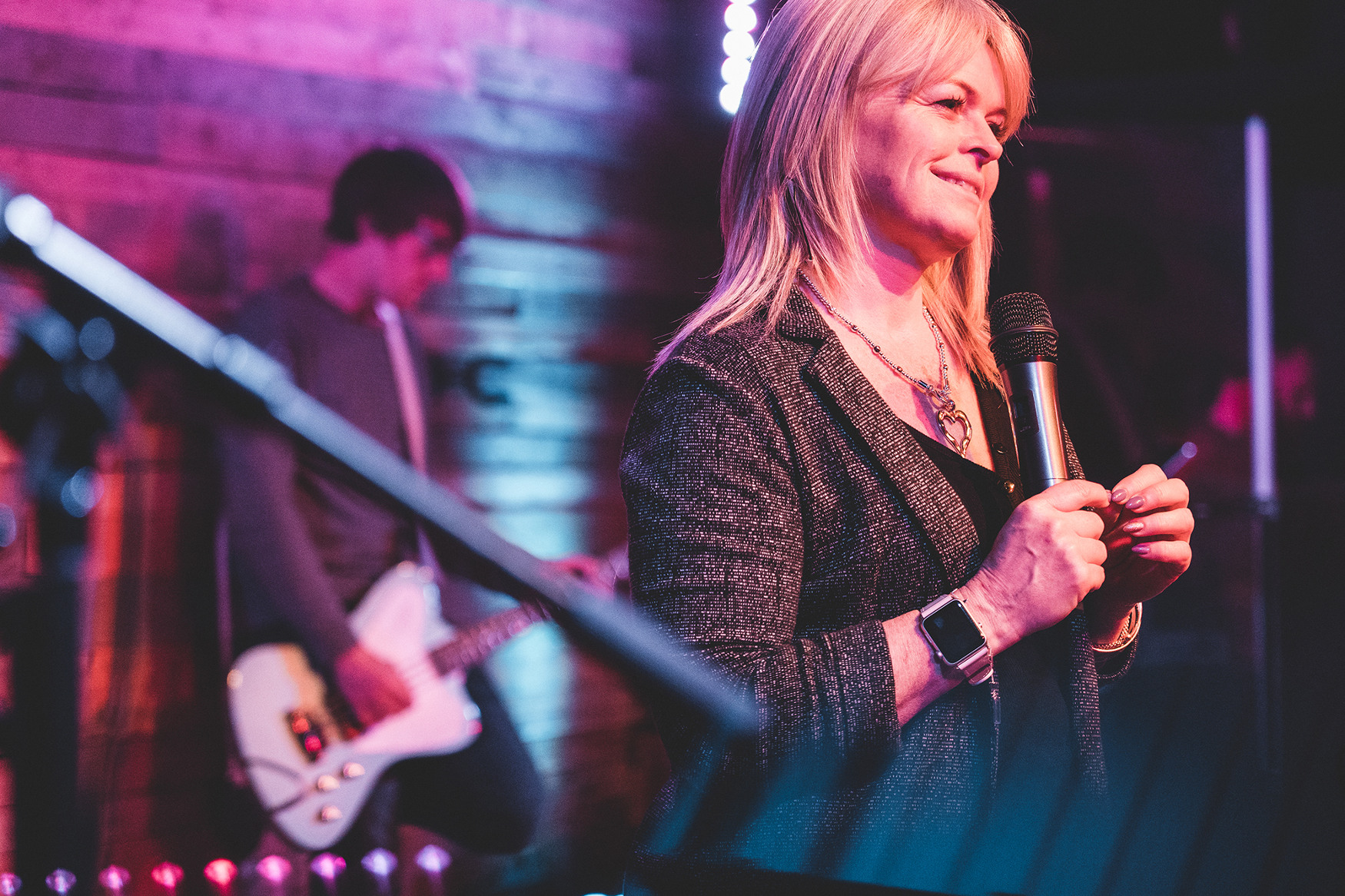 Let it Be
Sunday 10th January

Luke 1:28 Rejoice highly favoured one! You are blessed among
women.

She wasn’t anything at this point, but God made her what He called
her! Jesus is named the Beginning and the End (Rev 22:13), so He can
start something that doesn’t exist yet. The angel told Joseph in
Matthew 1:20 …that which is conceived in her is of the Holy Spirit!!”

Abraham knew this - Romans 4:17 … God in Whom he believed, Who
gives life to the dead and speaks of the non-existent things that [He
has foretold and promised] as if they [already] existed. (Amplified
Translation)

Abraham Genesis 17:5 I have called you Abraham for I have made
you the father of many nations. God made Abraham what he called
Him though it was humanly impossible. He started something in
Sarah’s hormones that hadn’t happened before! Hebrews 11:11 By
faith Sarah herself received strength to conceive seed…

Jacob Genesis 28: 26 Then He said, Let Me go, for day is breaking.
But [Jacob] said, I will not let You go unless You declare a blessing
upon me.

[The Man] asked him, What is your name? And [in shock of
realization, whispering] he said, Jacob [ meaning supplanter,
schemer, trickster, swindler]!
And He said, Your name shall be called no more Jacob [supplanter],
but Israel [contender with God]; for you have contended and have
power with God and with men and have prevailed.
And  [b] [the Angel of God declared] a blessing on [Jacob] there.
Jacob demanded a blessing, and after God changes his name, he gets
the blessing!

Gideon Judges 6:11 Now the Angel of the LORD came and sat under
the terebinth tree which was in Ophrah, which belonged to Joash the
Abiezrite, while his son Gideon threshed wheat in the winepress, in
order to hide it from the Midianites. And the Angel of
the LORD appeared to him, and said to him, “The LORD is with you, you
mighty man of valour!”

Gideon said to Him, “O my lord, if the LORD is with us, why then has
all this happened to us? And where are all His miracles which our
fathers told us about, saying, ‘Did not the LORD bring us up from
Egypt?’ But now the LORD has forsaken us and delivered us into the
hands of the Midianites.”
Then the LORD turned to him and said, “Go in this might of yours,
and you shall save Israel from the hand of the Midianites. Have I not
sent you?”
So he said to Him, “O my Lord, how can I save Israel? Indeed my
clan is the weakest in Manasseh, and I am the least in my father’s
house.”
And the LORD said to him, “Surely I will be with you, and you
shall defeat the Midianites as one man.”

Then he said to Him, “If now I have found favour in Your sight,
then show me a sign that it is You who talk with me.
Peter Matthew 16:16  Simon Peter answered and said, “You are the
Christ, the Son of the living God.”
Jesus answered and said to him, “Blessed are you, Simon Bar-
Jonah, for flesh and blood has not revealed this to you, but My Father
who is in heaven. And I also say to you that you are Peter, and on
this rock I will build My church, and the gates of Hades shall
not prevail against it.

God made him what He called him!
What does He call us? Some examples:
Romans 8:31 Yet in all these things we are more than conquerors
through Him who loved us.

2 Corinthians 5:21 God made Him to be sin for us Who knew no sin,
so that we might be made the righteousness of God in Christ

Matthew 5:13 You are the salt of the earth

Matthew 5:14 You are the light of the world

1 John 3:1 Behold what manner of love the Father has bestowed
upon us that we should be called children of God
(John 1:12 as many as received Him to them He gave the POWER to
be children of God, even to those who believe on His Name.)

Action: As you read the Bible and see what God says about you,
remember

He can start (and finish) the work and believe His Word as Abraham
and Sarah did.

Luke 2:19 Mary kept all these things and pondered them in her heart.
Let’s go back to Abraham and Sarah and see that faith does not have
knee jerk reactions. It pauses, it ponders, it considers beyond the
immediate opinions and prevailing views of eg the press.
Romans 4:19 And not being weak in faith, he did not consider his
own body, already dead (since he was about a hundred years
old), and the deadness of Sarah’s womb.  20  He did not waver at the
promise of God through unbelief, but was strengthened in faith,
giving glory to God,  21  and being fully convinced that what He had
promised He was also able to perform.  22  And therefore “it was
accounted to him for righteousness.”
23  Now it was not written for his sake alone that it was imputed to
him,  24  but also for us. It shall be imputed to us who believe in Him
who raised up Jesus our Lord from the dead,
Hebrews 11:11   Because of faith also Sarah herself received physical
power to conceive a child, even when she was long past the age for it,
because she considered [God] Who had given her the promise to be
reliable and trustworthy and true to His word.
Hebrews 11:17-19   By faith Abraham, when he was put to the test
[while the testing of his faith was still in progress], had already
brought Isaac for an offering; he who had gladly
received and welcomed [God’s] promises was ready to sacrifice his
only son, 18  Of whom it was said, Through Isaac shall your descendants
be reckoned.
19  For he reasoned that God was able to raise [him] up even from
among the dead. Indeed in the sense that Isaac was figuratively dead
[potentially sacrificed], he did [actually] receive him back from the
dead.
So how do we cultivate the inner life?

Psalm 138:3 In the day when I called you answered me and
strengthened me with strength in my soul

Ephesians 3:16 …that He would strengthen you with might
by His Spirit in the inner man.

Jude 20 Build yourselves up on your most holy faith, praying
in the Holy Ghost

Colossians 3:3 And set your minds and keep them set on what is
above (the higher things), not on the things that are on the
earth.

Matthew 6:33 Seek first the kingdom of God and His
righteousness and all these things shall be added to you

Isaiah 37:14 And Hezekiah received the letter from the hand
of the messengers, read it, and Hezekiah went up to the
house of the Lord and spread it before the Lord

1 Samuel 17:45 David to Goliath. You come to me with a
sword and with a spear and with a javelin, but I come to you
in the name of the Lord , the God of the armies of Israel

c. Give glory to God

d. Romans 4:19-21 He did not weaken in faith when he considered
the [utter] impotence of his own body, which was as good as
dead because he was about a hundred years old, or [when he
considered] the barrenness of Sarah’s [deadened] womb. No
unbelief or distrust made him waver (doubtingly question)
concerning the promise of God, but he grew strong and was
empowered by faith as he gave praise and glory to God Fully
satisfied and assured that God was able and mighty to keep His
word and to do what He had promised.

Philippians 4:8 let me say this one more
thing: Fix your thoughts on what is true and good and right.
Think about things that are pure and lovely, and dwell on the
fine, good things in others. Think about all you can praise God
for and be glad about. (The Living Bible)

Summing it all up, friends, I’d say you’ll do best by filling your
minds and meditating on things true, noble, reputable,
authentic, compelling, gracious—the best, not the worst; the
beautiful, not the ugly; things to praise, not things to curse. (The
Message Translation)